CCTV feeds from retail stores across the UK are triggering ‘security magic’ in Secom’s Control and Command Centre, where a combination of skilled operators and powerful software is tightening the screws on habitual offenders. 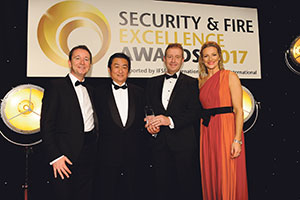 Recently recognised at the Security Excellence Awards as ‘CCTV system of the year’ (excluding cameras and lenses), Secom’s new ROGUES service – pioneered in a selection of Co-op stores countrywide – is already getting real traction with habitual offenders. The end-to-end solution is paying dividends in that repeat offenders are being identified and taken off of the street on the strength of Secom’s evidence and collaboration with multiple police forces.

Secom operators and analysts have submitted thousands of intelligence forms, unearthing a nucleus of habitual offenders up and down the UK. More than 500 individuals have been identified and case files on suspected criminal activity have been opened. So far, 25 individuals have been charged with multiple offences since November – a direct result of the intelligence gathered by Secom, plus the witness statements and CCTV evidence provided directly to the police.

Behind the scenes, Secom has a team of National Intelligence Model (NIM) trained analysts and ex-police officers employed as police investigation and communication managers.

A newly deployed IBM I2 iBase intelligence system enables development of an offender information catalogue, facilitating analysis of multi-source data in a secure environment. It also allows analysts to identify stores with the greatest crime risk, when crimes are most likely to be committed and, most importantly, by whom. IBM Analyst Notebook – a visual analysis tool – helps to turn iBase data into useful intelligence.

They enable staff to ‘bookmark’ when they believe an incident has occurred. Secom can then interrogate after the event and save the evidence (if it was a genuine event) and assist in the compilation of an MG11 form (witness statement) together with the evidence.

In addition to this, the intelligence Secom is now shaping allows analysts to provide customers with data that may justify a reduced manned guarding presence on site or for guards to be deployed only where the crime risk has been recent and a real threat. In some cases, this may result in significant cost savings – or the same budget can be spread over a larger number of stores. 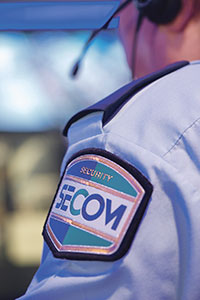 Secom’s ROGUES solution (Repeat Offenders Gallery Under Electronic Surveillance) has been developed to allow Control and Command Centre operators to alert on-site manned guards in real time when a known unwanted individual or offender is active in the area. This gives them an image of the individual (not savable in the app so Data Protection-compliant) and helps to make the guarding more effective in the fight against crime. And this has worked very well at trial sites.

Amid recent press reports that police will no longer investigate retail crimes involving goods worth less than £200 – which some retailers fear may exacerbate the estimated £6 billion annual shoplifting bill – the Secom solution plugs a potentially serious gap in the crime prevention process.

There is no need for police to visit crime scenes or for store managers to spend time downloading CCTV footage or writing statements. Secom says with limited resources at their disposal police forces have welcomed private assistance in dealing with low-impact high-frequency retail crimes. Several police forces now have pilot information-sharing agreements with Secom to facilitate this.