Family-run company Jackloc, based in Claybrooke Parva, is celebrating its success after being crowned Leicestershire Small Business of the Year, at the prestigious East Midlands Chamber 2015 Business Awards.

Having initially being shortlisted from 12 applicants as one of three finalists in Leicestershire, the Jackloc universal window and door restrictors, beat off stiff competition to scoop the award, which was presented at a black-tie gala dinner at the Athena in Leicester.

The award came following a day of intense presentation and judging at the end of July, during which the company was assessed against a variety of criteria including high business growth and having a robust plan for financial performance. The prestigious award was presented by Oliver Jones, CEO Assistant and Head of External Affairs at Aggregate Industries, a global market leader in the construction industry and part of the LafargeHolcim Group of companies.

Commenting on the win, Judith Burrows, Director for Jackloc said, “We are absolutely delighted that the efforts of the whole Jackloc team have been recognised at such a high level and I would like to thank each and every one of them for all of their dedication and hard work. 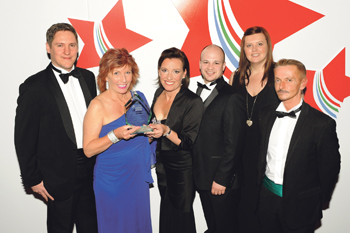 “Since Jackloc was founded in 2003 the aim was always simple; to reduce the number of injuries and fatalities from falls out of windows and we certainly feel very proud that our determination to achieve this has not gone unnoticed.”

Emma Wells, Jackloc Director added, “It was a very emotional night, both the apprehension before the winners were announced and sheer elation at finding out we had won.

“As a family run business, we are all very passionate about what we do in reducing the risk of falls out of windows, and our moto ‘in spirit and in truth’ remains at the heart of our business today. I would like to thank the Jackloc team, all of our suppliers and customers who have supported our growth throughout the years.”

As a county winner, Jackloc will now go on to compete in the British Chamber of Commerce’s (BCC) regional business awards for the East Midlands, with the chance to progress to the BCC’s national awards in November.

Over the last year, Jackloc has continued expanding into new overseas markets and won a landmark legal battle to protect its brand in Turkey. The company has also stepped up its awareness-raising campaign work, crusading the guiding ethos which drives the business, to save lives all over the world by reducing the risk of falls from windows.

The window restrictor reduces the risk of falls from open windows by only allowing them to be opened to a safe degree.