Pickfords Business Solutions moved the European Banking Authority from the UK to its new home in France this year. 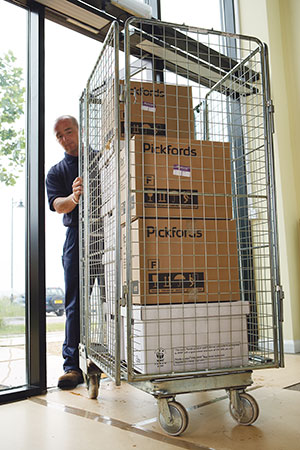 Established in 2010 by the European Parliament, the European Banking Authority (EBA) is a regulatory body that works to maintain financial stability in the European Union’s banking industry. Following the UK’s decision to leave the UK and its need to be based in an EU country, the Authority took the decision to relocate to La Defense, in Paris.

The principle objective of the project was to ensure that there was no disruption to the Authority’s business operations during the transition. Pickfords created a plan to move the office furniture, equipment and IT over two weekends, then provided an environmentally friendly and cost effective solution to re-use and recycle a number of unwanted assets that were left behind in Canada Square, London.

A contingency plan was drawn up which considered all potential eventualities which might disrupt the project, including delays at the border, which at the time of the proposed project, could have been an impact of Brexit.

The project challenges included; both physical and timed access restrictions in London and traffic restrictions on the French Roads on Bank Holidays and Sundays, plus the specific need to decant from the large artic vehicles to smaller shuttles due to height restrictions in the loading bay in Paris.

The move was completed using Business moving teams in London and Pickfords’ Office Moving Alliance Partners in France, AMT, who had worked with Pickfords to relocate NATO’s headquarters in Belgium. Utilising more than 1,200 Bar-Coded crates, 13 articulated vehicles, Pickfords provided Project Management, IT decommissioning and recommissioning services, furniture fitters, and an environmental solution to reuse the furniture that the European Banking Authority did not need at its new facility.

The move was completed on time, within budget and without any disruption and The European Banking Authority opened for business as its new location in June.

Head of Pickfords Business Solutions, Martin Budd, said, “This move was a great challenge to Pickfords and the project managers we put on both sides of the channel to ensure its success. There were significant access considerations, and this move needing to be planned against the backdrop of the Brexit uncertainty as well as possible disruptions to transport due to the protests in Paris by the Yellow Vests.

“All of our teams and managers were extremely diligent, and worked closely with our French colleagues to minimise the risks to ensure that the European Banking Authority was delivered to its new home by the deadline.”