Bagnalls were honoured in the mid-1960s, when we were asked to paint the Hangar where the supersonic Concorde planes were originally assembled and again in 2017 when Kier Construction appointed Bagnalls as the chosen painting contractor for the new Aerospace Bristol museum, in Filton. 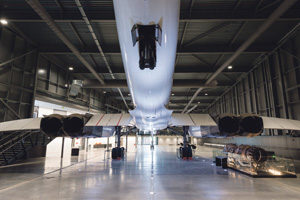 Aerospace Bristol comprises of a new purpose-built Hangar which is home to the last Concorde ever to be built, Concorde Alpha Foxtrot and also a grade II listed World War One Hangar, which will exhibit other historic aircraft and vehicles marking Bristol’s aerospace and transportation history.

Located on the historic Filton Airfield, Aerospace Bristol is a family attraction that tells a fascinating story of ordinary people achieving extraordinary things, with amazing aerospace exhibits – including aeroplanes, helicopters, missiles, satellites and more – and a variety of hands-on activities, such as a real Airbus A319 wing where visitors can move the flaps and slats to explore the physics and engineering of flight.

Our decoration works, to a PPG specification, only form the backdrop to the wonderful exhibits on show, including, fighter planes, helicopters and satellites, but we are very proud to be connected with this amazing, new £19m museum. The museum is now open to the public and is certainly worth a visit http://aerospacebristol.org