Wastecycle, the East MIdlands’ leading resource management and recycling company was named ‘Supplier of the Year’ and won the Health & Safety Award in this year’s Saint-Gobain Construction Products supplier awards. 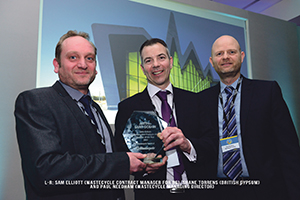 Companies including O2, EON, DHL and Hanson were nominated alongside Wastecycle, but the firm’s commitment to customer service, innovation, collaborative working and health & safety resulted in earning top honours in this year’s awards, which were announced in early March.

Paul Needham, Wastecycle Managing Director, said: “These awards are a great achievement, especially when you consider the calibre of the other suppliers that were also nominated. This was a real team effort that we couldn’t be more proud of.

Wastecycle was named ‘Supplier of the Year’ for the plasterboard-recycling service it developed for British Gypsum, which has prevented over 30,000 tonnes of plasterboard material from reaching landfill annually. Additionally, Wastecycle’s 18-month-old health & safety culture change programme resulted in a 20% reduction in personal injuries during the first half of 2015, in addition to the plaster team remaining accident-free throughout 2015.